While celebrity impersonation fraud and romance/catfish fraud are not mutually exclusive, there is a great deal of overlap – with scammers impersonating celebrities, looking for fans online who are engaged with the celebrity, and then fostering a relationship long before the subject of money comes up.

They’re master manipulators who often put hours, days, and even months into nurturing each “relationship”.

An excellent example of a romance fraudster who adopted a fake name and pretended to be a high-powered and international jet-setting pseudo-celebrity is Simon Leviev – more commonly known as the Tinder Swindler. “Simon Leviev” conned several women out of an estimated £10 million in a hybrid romance scam and Ponzi scheme.

Romance scams (also often known as catfish scams) sometimes involve fraudsters pretending to be celebrities thanks to the ease of access to photographs and to an easily targeted demographic of fans and followers online. Social media sites like Facebook and Instagram make it incredibly easy for a fraudster to look through the list of accounts following a particular celebrity, from which they can then use to choose their mark.

Read on to see just a handful of the celebrities that fraudsters have impersonated in order to swindle the money of their victims.

The Great British Bake-Off mainstay took to Instagram in February to warn his 500k followers of imposters using his name and face to con fans out of money. He went on to list his @paulhollywoodbakes, and his verified @paul.hollywood accounts as his only legitimate accounts. According to reports, fans were offered revealing photographs in exchange for money – with one fan admitting to sending £4,700 to the fake profile.

The likeness of Essex-born singing sensation Olly Murs has been used by con artists to swindle almost £200,000 away from unsuspecting victims. Several women across at least two different countries were targeted by an imposter pretending to be the heartthrob X-Factor finalist. Alongside setting up a fake profile they also forged his driving licence in order to better con their victims. One woman in Germany lost £100,000 including a £31,000 loan when the phoney “Olly” repeatedly requested financial help, claiming his money was locked away in a secure bank account that he didn’t have access to.

In one case which was even featured on the TV show Catfish, a fraudster impersonating celebrity pop star Katy Perry led one man to believe that the pair were in a relationship for 6 years. During this time, the man (who lived in the US) developed feelings and even spent a quarter of his life savings on a ring that he planned on using to propose to ‘Fake-y Perry’. Eventually, it was discovered that the fraudster was actually a woman called Harriet, who lived in Gloucester, England and not the state-side starlet.

Among the many famous faces used to swindle unsuspecting victims is (inter)national treasure, Nic Cage. No stranger to a stolen identity, the Face/Off star was reportedly impersonated by a fraudster who conned a woman out of around £10,000. She falsely believed that she had been exchanging messages online with the Oscar winner who purportedly required help with money for tax reasons. The impersonator even claimed to be visiting the UK shortly and suggested that Cage would meet up with the victim.

Jason Statham may be better known for his work on The Fast and the Furious series or any number of other action movies involving fast cars and even faster fight scenes, but to one grieving woman, he was a light in an incredibly difficult time. Or so she thought. In reality, the fraudster impersonating Statham was relying on the good heart of the victim and managed to con her out of an undisclosed but significant amount of money over the several months they were speaking. Unfortunately, the scammer chose the perfect time to target their victim, as she had only recently suffered the loss of her mother and fiancé.

“I don’t feel like I was in the right place myself because of what I’d been through”.

One social media user reportedly sent $11,500 to a fraudster pretending to be The Boss – Bruce Springsteen – after striking up a conversation online. ‘Bogus Springsteen’ allegedly claimed that he was separating from his wife and needed financial assistance – requesting the sum in the form of iTunes gift cards. This took place over several weeks, with the victim sending “maybe four, five, six-hundred bucks, little by little every week”.

One Missouri USA resident struck up a flirtatious online conversation with somebody claiming to be the Michelin-star chef Gordon Ramsay. They talked for months and even spoke of moving to Los Angeles together and starting a new life and family. The victim paid out $1,000 in gift cards to a “real estate agent” arranged by “Gordon” before questioning the behaviour. After making the payment, ‘Scamsay’ requested an additional $8,500, though the victim was thankfully wise to the scheme by this point.

There is no shortage of examples of imposters pretending to be celebrities in order to con and swindle innocent victims out of their money, and this isn’t a problem exclusive to celebrities. With the advent of social media and online dating sites, scammers have never had it so easy to target, contact and then hustle people from the comfort of their homes anywhere in the world.

Only recently CEL Solicitors represented a romance scam victim who had lost £150,000 to a fraudster online purporting to work in the military and who needed help supporting their child. After her bank refused to offer more than £50 compensation, she reached out to the CEL fraud and scam team. We were able to secure a £179,000 award for her. You can read more about it here.

If you’ve fallen victim to a romance scam there is still hope for getting your money back. At CEL Solicitors we work tirelessly to help victims get their lives and their money back. Our dedicated fraud and scam team are on hand to help. Tell CEL today on 0808 273 0900 or apply online and a member of our team will be in touch. 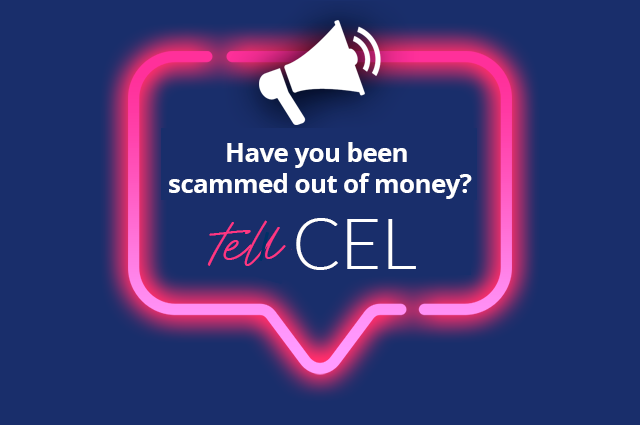 Have you fallen victim to a catfish scam?

We can help get your money and your life back on track.