CEL Solicitors, which specialises in property disputes, is seeing a rise in feuding neighbours, unhappy with each other’s handiwork.

This follows a £110bn pandemic property boom which saw 5 million Brits redecorating, 1.5 million building an outhouse and over a million adding extensions.

Shed offices, cinema rooms and snugs were among the top home improvements last year, with British consumers spending an average of £2,011 per person on refurbishments.

However, now that the dust has settled on lockdown DIY projects, many people are finding their neighbours’ additions a blot on the landscape or worse still, an encroachment on their boundary.

Land boundary disputes are undoubtedly the most common property disputes we see. This often occurs when dividing fences or hedges are replaced and one party feels the other has encroached on their land.

In addition to disagreements regarding fences, extensions can also result in land boundary disputes. This is especially true when one party takes an extension right up to the property boundary and elements, such as the roof, guttering, or overhang.

Party wall disputes typically occur when properties are renovated if changes to a building cause an issue with a party wall. These types of property disputes are prevalent in terraced housing and semi-detached properties as well as flats, including the ceilings and floors in a flat.

Room with a view

Obscured views can be a source of contention between neighbours. We’ve seen examples of people cutting down their neighbours’ trees, without their permission, to improve the view from their garden. Extensions or structures, such as outhouses or treehouses, can be contested if erected without planning permission.

Often, it’s necessary for one neighbour to go on to the land of another to carry out repairs to their property. This is a legal right under the Access to Neighbouring Land Act 1992. However, neighbours who don’t get along can be quick to refuse access and make accusations of trespass.

Commenting on the top five post-pandemic property disputes, Mark Montaldo, said: “If possible, neighbours should do everything they can to keep the peace, as disputes usually need to be disclosed if they later decide to sell the property. This can reduce its value or worse still, prevent a sale.

“Our advice would always be to communicate with your neighbours prior to starting major home improvements, especially those close to the boundary of adjoining properties. It’s often a lack of communication that causes disputes to escalate so giving advanced notice of planned works can go a long way.

“Nevertheless, if you reach a complete deadlock with your neighbour, and can’t see eye to eye, then it’s best to seek advice from an experienced property dispute solicitor on what your rights are and the best way to proceed. Your home is often your greatest asset, which you should be able to quietly and peacefully enjoy.”

If you have reached an impasse with your neighbour, tell CEL. Our land boundary solicitors are on hand to help settle the dispute as quickly and amicably as possible. Call on 0808 273 0900 or apply online and a member of our team will be in touch. 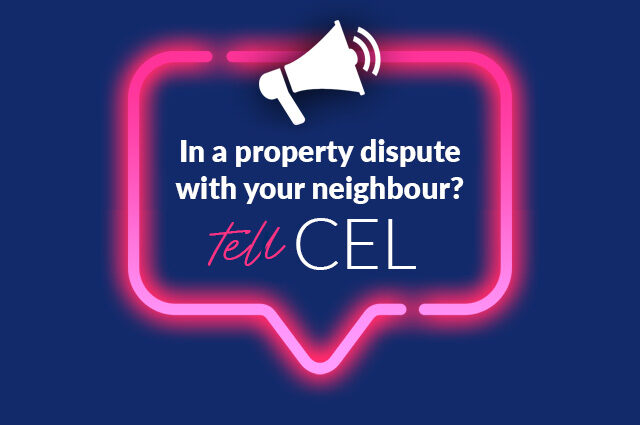 Disagree with your neighbour over your land boundary?

Tell CEL. Our land boundary solicitors are on hand to help settle the issue before a minor disagreement can turn into a major argument.