£1750 compensation for tenant with black mould, cracked doors and more

A South Kesteven District Council tenant who first made a complaint in 2018 has finally received compensation after living with black mould and disrepair in her property for several years.

After discovering that her walls were damp in 2018, Sarah (name changed for anonymity) made the first complaint to her landlord, South Kesteven District Council. Since this initial request, new areas of disrepair have developed including cracked and delaminated external doors, and damp and black mould spreading through the property. Additionally, Sarah’s midwife reported that the state of the property needed addressing on two occasions, several months apart, but again nothing was done.

Separately, a GP also brought attention to the issue after concluding that a rash which had developed on Sarah’s daughter was likely due to black mould on the property.

These requests for repairs were ignored by South Kesteven District Council until Sarah contacted the CEL Solicitors housing disrepair team.

A surveyor commissioned to inspect the property noted high levels of moisture and defective plaster in the living room. A leaking gutter was believed to be contributing to the dampness via water penetration through the wall, and rising damp was found extending across the wall and chimney breast.

The front and back doors were found to be cracking and delaminating, allowing water to enter the property and causing further damp issues.

It was also noted that the boiler on Sarah’s property was faulty and periodically cut out. This would need re-routing, and likely a new one-way pipe fitting.

At one point during Sarah’s tenancy, the fire brigade had been called due to a smoking extractor fan. They stated the fan was dangerous, not fit for purpose, and a fire hazard. The surveyor confirmed this.

£1,160 compensation for Places for People tenant waiting a decade with disrepair

John Lowry, head of housing disrepair at CEL Solicitors said: “Many council housing providers tend to ignore their tenants for as long as possible to avoid paying for repairs. If they had acted sooner there would be less damage to the property and the cost of repairs would be lower, benefiting the tenant and the landlord.”

As part of their agreement, South Kesteven District Council paid compensation and is to complete repairs and remove the black mould in the property within a fair and approved timeframe. Should this agreement be breached, the CEL Solicitors repairs team are on hand to support Sarah further.

The CEL repairs team are separate from the housing disrepair team and takes over after a case has been settled, ensuring repairs are completed to a good standard within the agreed time period.

If you are living with housing disrepair and your landlord is ignoring you, tell CEL. Our housing disrepair team is on hand to offer free initial advice. We work on a no-win, no-fee basis meaning you have nothing to lose. Call on 0808 273 0900 or apply online and a member of our team will be in touch. 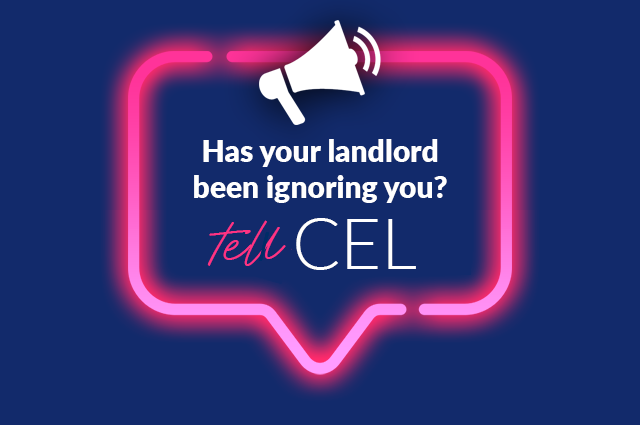 Are you suffering with mould, damp, or other disrepair?

Tell CEL today. Our dedicated housing disrepair solicitors are on hand to help you get the repairs you deserve.