CEL’s Proclaim Developer, Ken, has set himself the challenge of running 50 miles around the city of Liverpool. Following a year of cancelled running events, Ken has set his sights on an Ultra Marathon in his favourite city. Read more about Ken’s journey into running here.

How did you get into running?

I started running the day after watching Super Saturday in the London 2012 Olympics. I’ve always loved sport, I’ve just never been particularly good at it, which coincided with my not being comfortable being me. I didn’t realise it at the time, but I was obese and sometimes suicidal. I didn’t have many friends and I didn’t feel I deserved any. Watching Super Saturday where Mo Farah, Jess Ennis and Greg Rutherford won their gold medals in a space of 42 minutes was the turning point I needed. I downloaded the Nike Run Club app, which I still use today to log my activity and headed out on my first walk. Over the following weeks the walks became runs, the runs turned into miles and the miles turned into a happier, healthier me. I started to lose weight and I started to believe I could be ‘me’ again.

Since then, running has changed my life. I signed up for my first 10K race in Spring 2013. Those initial 10K’s turned into half marathons, which turned into marathons (London 2016 and Chicago 2018 and 2019). I’ve also achieved an England Athletics Coaching badge and I’m a proud leader in running fitness. I coach beginners at a local club, Dockside Runners, located at the Dockside Diner on Man Island. As part of this, I’ve taken complete non-runners and helped them on their journey, in which they’ve gone on to do things they’d only previously dreamt of. Coaching for me has been the best thing I’ve ever done, to see groups of individuals improve week on week in a safe environment where I encourage the belief of our mantra ‘(s)miles’.

For me, running doesn’t have to be all about running until you collapse – it can be a social thing and/or a mental health thing. I make sure that people enjoy their runs and set them up with the tools they need, both physically and mentally, to pursue their dreams. Our group aim is to give the belief that they can do these things. I always say you can ‘possible your impossibles’.

Why did you want to set yourself this challenge?

It wasn’t by choice, well not at first! I signed up to take part in 2020 as a favour to help my friend and fellow coach, Ali, who wanted to take part in the Lakeland 50 miler in the summer. Of course, we all know what happened last year and all events were cancelled. I then decided to defer it until this year and so the seed had been planted. It felt, to me, that this was the next logical (if you can call running 50 miles logical) step in my running journey. So, April will be my new ‘possible your impossibles’. I’m not doing it for my ego, I would like to inspire others to do these wonderful things no matter how hard they think it might be. I have already inspired people in the office to take up the couch to 5K based on my journey and I’ve helped coach several members of staff.

I believe running can change so many people’s lives, as it has mine, and it’s saved me at the same time.

What’s the route you will be taking?

So, with the Manchester to Liverpool Ultra now off the table, I had to come up with a plan B – Liverpool to Liverpool Ultra. Fifty miles comprising of five ten mile legs making up the 50 miles fanning out across the city and beyond. I think of it as a thank you to the city that has given me so much.

My club has been incredibly supportive throughout my journey. Some are running parts of the journey with me or simply cheering me on when I reach the Pier Head, as this is where each ten-mile leg starts and ends. It’s going to be such an emotional day, but I’m so touched already by the help and support everyone is giving me, especially with it being a bank holiday!

Ali has even made a custom medal for me to give me at the end of the run.

What’s the next challenge?

Rest. I’ll take a couple of weeks of recovery until the summer when we return to run-club. A lot have signed up to the London Virtual Marathon and I have volunteered to help coach and run some of the long runs with them in preparation. I’ll also be taking part in the Liverpool Rock n Roll event which has always been one of my favourites. After that, next year is my 10th year running, so I’m sure more adventures will be found.

Keep up to date with how Ken gets on by following our social media channels where we will share Ken’s journey. Now, all we can say is, good luck ken! 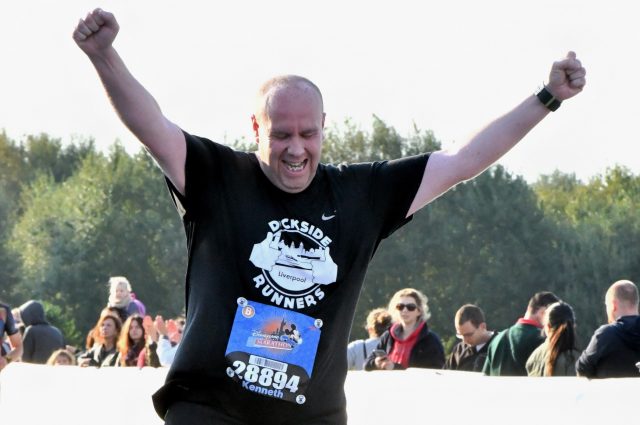 Good luck Ken with your Liverpool to Liverpool Ultra Marathon.